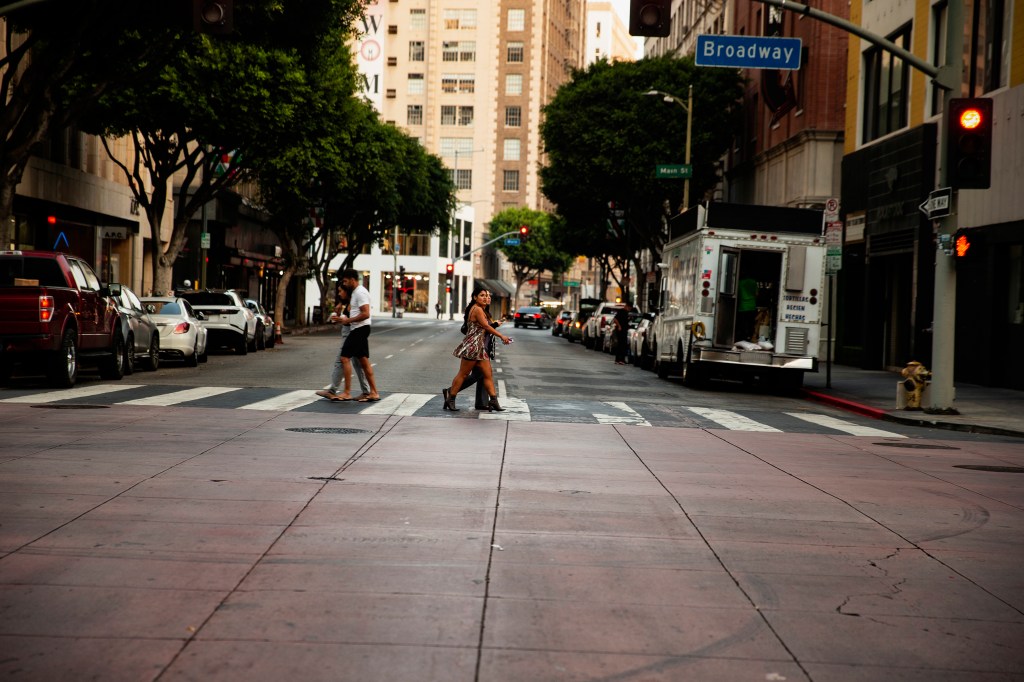 “Does anyone even live downtown Los Angeles?” visitors often ask.

“Downtown has a richness,” says Jordan Nova of Hotel Per La. “It has real honesty. There is no downtown dressing.People fall in love with honesty and also with creativity.

After a smooth opening, Hotel Per La officially opened its doors in September. Twelve stories tall, at the corner of 7th and Olive Streets, the historic building originally housed the Bank of Italy – now Bank of America. Construction was completed in 1922, as envisioned by architectural firm Morgan, Walls & Clements, unveiling a neoclassical style design with Doric columns and marble floors. It was known as Giannini Place for many years before becoming a hotel in 2018, NoMad, which closed two years later due to COVID-19. Taken over by investment manager HN Capital Partners, it was redesigned with the help of operator Sage Hospitality Group and designer Jaqui Seerman. They gave new life to the space.

Honoring its past, retaining the structure, Hotel Per La is LA alive with Italian flair. There’s a rooftop pool and bar, offering refreshing cocktails (with a long list of flavored spritzes created by Coleen “Coco” Morton); a cafe on the ground floor and a restaurant, Per L’Ora, where drinks are strong and dinner is served in a large dining room. Chef Courtney Van Dyke oversees the cuisine (tuna carpaccio, lobster tagliatelle, veal milanaise).

“There is this real community,” continues Nova, from the region. “There’s this wonderful cultural array here that no other LA neighborhood really has.”

Downtown certainly stands out from the rest of LA. For one thing, it’s walkable. Lively, it is dense and checkered.

Modern skyscrapers mingle with architectural monuments. The Notre-Dame Reine des Anges church comes to mind. Founded in 1814, it was built in El Pueblo de Los Angeles — one of the first cities created during the Spanish colonization of California. Settled in 1781 by a group traveling north from present-day Mexico, according to historical records, the layout is reminiscent of centers found in the Spanish Empire: a central plaza with a church. It was in 1847 that the American forces took control of it.

Downtown was once the village of Yanga, home to the indigenous people of the Los Angeles Basin and the Southern Channel Islands known as the Tongva. Enslaved and killed, they built the new colonies.

The region has a dark past. And it has fallen on hard times over the years, economically declining, seemingly abandoned by the city. LA’s homeless crisis is most apparent here; Skid Row is hard to ignore – as much as it seems.

To better understand the city center is to know its districts, among which the historical core (with its palaces of cinema), financial, flower, toy, jewels, warehouse, fashion and arts.

The arts district is trendy; it’s where both club members Soho House’s Warehouse and New York bar Death & Co. landed in 2019. It attracts tourists who stop to visit the Hauser & Wirth galleries and (for connoisseurs) much more low-key The Box, grabbing beers in the open air at nearby breweries. The newest attraction, however, is one structure: the 6th Street Viaduct, the bridge that connects the Arts District to Boyle Heights. The action takes place on Traction Avenue, where Youth to the People has its storefront and neon artist Lili Lakich occupies the original location of the Museum of Neon Art, which she co-founded in 1981.

A mile and a half away is the Society of Art Los Angeles, known as SOLA, a non-profit organization that organizes exhibitions and community talks. “Kimono Wednesdays,” by Pandasex (Gregory Chikara Shimada) and Parker Koo Ito, is currently playing until November 6.

It’s down the street from APC, Acne Studios, Ganni, Paul Smith and Pop DTLA, a pop-up that features indie brands like Natashia Miyazaki, on South Broadway. Around the corner from West 9th Street, Swedish café ilCaffè offers espressos, wine and bites, and a short walk away, Little Smoke sells homemade organic incense. This is where fashion hipsters hang out.

Bounded on the east by the Los Angeles River and on the west by the 110 Freeway, creatives once flocked downtown for the cheap rent and sprawling lofts. Those days are over; neighborhoods are toppled and replaced by glass-filled towers (still marketed as “luxury”, not always well-built).

Chinatown and surrounding areas are arguably where artists are today, opening up DIY spaces. On November 5, the Los Angeles Chinatown Business Council will host a walking tour of its streets, “Undiscover Chinatown,” with visits to galleries, herbalists and antique shops.

A five-minute drive (20-minute walk) is Little Tokyo, where locals line up for sushi at Sushi Gen and foodies head to the newly opened Hansei by star chef Chris Ono at the Japanese American Cultural & Community Center (for a nine-course menu that costs $175 per person). Wolf & Crane serves Japanese whiskey nearby, and the Japanese American National Museum has shows and screenings (like Paul Daisuke Goodman’s “No No Girl,” a family story exploring three generations of Japanese Americans). Shops like Popkiller and Raggedy Threads offer vintage finds.

Most visitors to Los Angeles are familiar with Bunker Hill, although they probably don’t know it by name. This is where The Broad and the Museum of Contemporary Art are located on South Grand Avenue. The Conrad Hotel garnered buzz when it opened the block across from the Walt Disney Concert Hall over the summer. This is where José Andrés chose to install his Spanish restaurants San Laurel and Agua Viva, on the roof. Then it will present Bazaar Meat next door, on the sixth floor of Greater LA

Across the street on November 17, the Walt Disney Concert Hall will host an invitational rehearsal of Uzbek pianist Behzod Abduraimov’s performance of the late Russian composer Sergei Prokofiev’s Piano Concerto No. 2. It is “one of the most technically formidable piano concertos in the standard repertoire”, notes the concert hall, under the direction of the Los Angeles Philharmonic Orchestra and Xian Zhang.

The MOCA exhibition “Henry Taylor: B Side” will then have opened its doors, from November 6th. Surveying thirty years, it is a dive into the work of the American artist based in Los Angeles in painting, drawing, sculpture and installation.

“It’s all inside of you,” Taylor says of her artistry. “It just came out.”

Meanwhile, at The Broad, live programming is back after a three-year hiatus.

In September, the museum unveiled “Ü & EYEYE” by Lykke Li. The Swedish singer turned her latest album into an immersive experience. It was produced by Solana Rivas, with installation design by Nick Verstand and spatial sound mixing by Warren Brown.

“Art in general for me – art that I love, art that I respond to – I think the more personal you are, the more a direct vessel you are,” she says. “I feel like that’s where it transcends and becomes universal.”

Next, in conjunction with the “William Kentridge: In Praise of Shadows” exhibition, The Broad and Redcat will co-present the world theatrical premiere of “Houseboy,” developed at the Center for the Less Good Idea in Johannesburg, South Africa. . The show is open from November 17 to 20, while the show runs from November 12 to April 9, 2023.

Tired of raking leaves? Science says you really don’t have to

‘Hyperbitcoinization’ is coming to an emerging market near you, says Paxful’s Ray Youssef