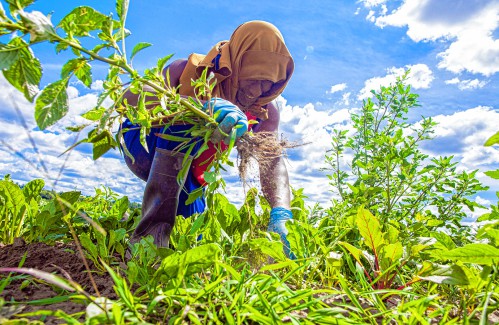 When it comes to growing organic food in New Hampshire, the numbers might not tell the whole story.

But as the region’s largest organization supporting organic farms gears up for its 50th anniversary, there’s a feeling the paperwork results don’t reflect what’s going on.

“Many farms are moving towards using organic practices, but may not be certified. There is a trend to continue using organic, regenerative and sustainable practices, but some individual farmers may not want to be certified,” said Nikki Kolb, director of operations for the state chapter of the Northeast Organic Farming Association, or NOFA-NH.

She notes that a number of private and nonprofit groups have been authorized by the USDA to provide organic certification, so the state numbers don’t tell the whole story.

Becoming certified is valuable in the marketplace, as customers will often pay more for products or produce from these farms, but it can be too expensive and time-consuming, especially for the smaller farms that make up the bulk of the New Hampshire agriculture. A significant cost is that fields often have to lie fallow for three years to ensure that no pesticides or herbicides remain before certification is possible.

Despite the official numbers, Kolb said continued interest in information and workshops provided by NOFA-NH, along with questions from farmers and consumers, shows that interest in “organic, regenerative and environmentally friendly farming practices rational continues to be strong”.

Allen G. Wyman, director of the state Department of Agriculture’s Regulatory Services Division, said the division has only three inspectors, which is why it has stopped providing organic certification for livestock.

“It’s just too much,” he said, giving a hypothetical situation: “You get a call at 2 a.m. from a vet with a question about (the use of) a certain chemical in a cow!”

However, he said there are no plans to reduce state organic certification for non-animal operations.

Kolb said buyer preference continues to be a strong driver in supporting organic practices, as does the state’s preference for locally grown produce and the proliferation of farmers’ markets and farm stands.

And it’s not just farmers, she says. “We also work with amateur gardeners. Many are very interested in following organic or regenerative practices.

A less fortunate driver of interest is the climate emergency, which has made more people aware of the need for improved soil health, one of the main benefits of avoiding the use of synthetic chemicals, and has makes you think about the impact of growing food on the environment.

NOFA was born out of a 1971 organizational effort by Samuel Kaymen, who co-founded Stonyfield Yogurt. It now has chapters in every New England state except Maine, which has a similar association called MOFGA, as well as New York and New Jersey. The non-profit organization says it is made up of “more than 5,000 farmers, gardeners, landscape professionals and consumers working to promote healthy eating, organic farming practices and a cleaner environment”.

His work includes work on laws and regulations. Kolb pointed to soil health legislation passed in New Hampshire last year and how the group is trying to push through a farm-to-school bill that would encourage “more local shopping that would help all farmers, not just organic farmers‘.

At the federal level, NOFA is one of the groups trying to shape the next Farm Bill. “There’s a lot of money on the table,” she said.

NOFA-NH is hosting two events to celebrate its anniversary. One is a farm-to-table dinner and fundraiser at the Colby Hill Inn in Henniker this month, which is already sold out.

A pizza night with music and farm tour will take place at Brookford Farm in Canterbury on Saturday, October 1 from 1-4 p.m. For more information, see www.nofanh.org/brookford-farm-event.