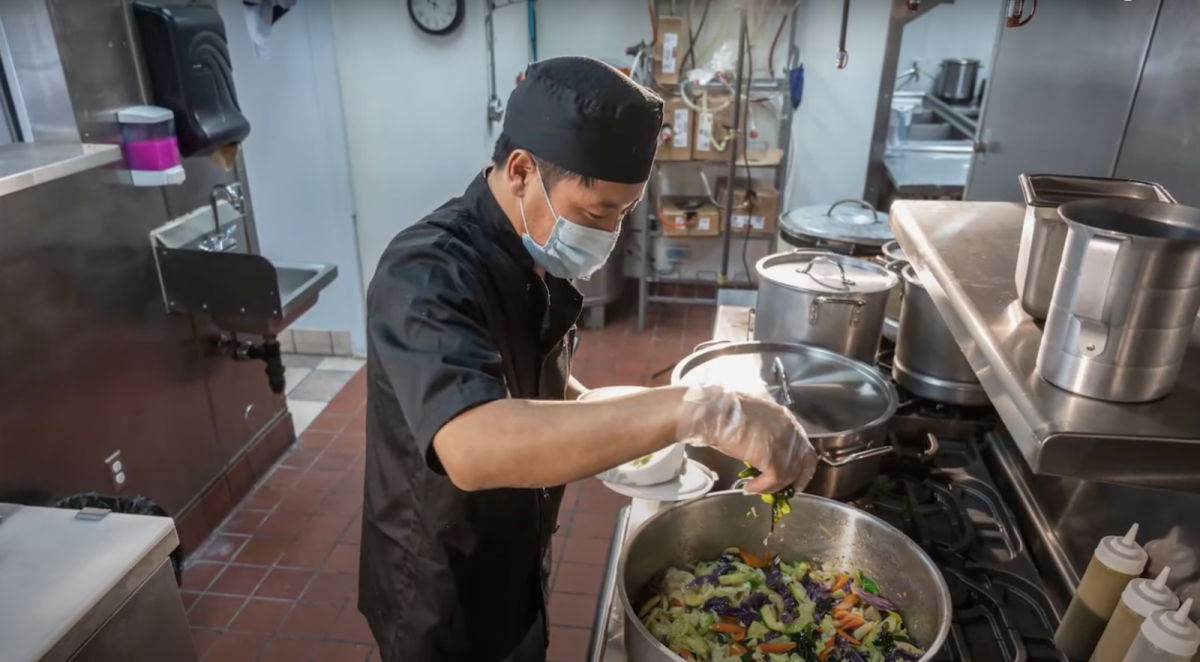 This Tibetan monk has opened a new vegan restaurant in Sacramento, California, largely influenced by a macrobiotic diet that aims to reduce animal products and eat seasonal, locally grown foods.

Luo Rong “Sam” Sang Zhu, a Tibetan monk, opened the restaurant with his brother-in-law/best friend on May 1, 2022. Himalaya Organic Vegan Restaurant aims to bring “peaceful food” to the Sacramento and Natomas area.

The macrobiotic diet comes from Zen Buddhism and its origins can be found in Japan. The diet tries to balance the yin and yang elements of food and is based primarily on grains, vegetables and other plants.

Sam was born and raised in Tibet and fled the country in 1995, ending up in India to study Buddhism. During his time as a monk, he cooked for 200 monks at a time, with over 5,000 in total at the temple. He fell in love with the cuisine and food culture within Buddhism.

Later Sam moved to Europe and cooked for a 5 star hotel. He found himself drawn to vegan food, and in 2013 he moved to the Bay Area of ​​California to work at his uncle’s vegan restaurant. He worked there for five years before moving to Sacramento to be closer to his family and finally opened his own restaurant this year.

At Himalaya Organic Vegan, every plate is vegan, gluten-free, sugar-free and organic. “Food that does not harm animals, is healthy and tastes great!” says the website. They welcome all cultures, religions and peoples to try their delicious dishes.

Sam’s menu changes twice a day and is based on fresh, local vegan ingredients. Customers can order any a la carte item for $6, but people are encouraged to order the entire menu on one plate, which ranges from $12.75 to $15.75.

Although Sam says business has been slow so far, his philosophy of openness goes far beyond financial gain.

“I’m trying to make money, of course I’m (in) business. But I think to myself, ‘how is it possible to make really delicious food where people like it?’ This is my number 1 (priority),” Sang Zhu told The Sacramento Bee.

Sam and his brother-in-law start preparing the food at 7 a.m. and post the lunch menu on their website around 9 a.m. They start working on another batch of vegetables around 1pm and post the dinner menu around 4pm. Three of the four pies are also still on the menu, including Chocolate, Mango, Strawberry, Key Lime Pie and Coconut. Check Himalaya Organic Vegan Restaurant and follow them on their Instagram @himalayan_vegan_organic.

Public funding gives us a greater chance of continuing to provide you with high quality content.Click here to support us

Learn how to cook plant-based meals at home

For those who wish to eat more plant-based, we highly recommend purchasing one of our many plant based cookbooks or by downloading the Food monster app which features thousands of delicious recipes, making it the largest vegan recipe resource to help reduce your environmental footprint, save animals and get healthy! And, while you’re at it, we encourage you to also educate yourself on the environmental and health benefits of one plant-based diet.

Here are some resources to help you get started:

For more content about animals, earth, life, vegan food, health and recipes published daily, subscribe to the Newsletter A Green Planet! Also don’t forget to download Food monster app on the AppStore. With over 15,000 delicious recipes, this is the largest resource of meat-free, vegan, and hypoallergenic recipes to help you reduce your environmental footprint, save animals, and get healthy!

Finally, public funding gives us a greater chance of continuing to provide you with high-quality content. Please consider support us by making a donation!

hair care: How does a sedentary lifestyle affect your skin and hair? Here’s your complete guide to skin and hair care