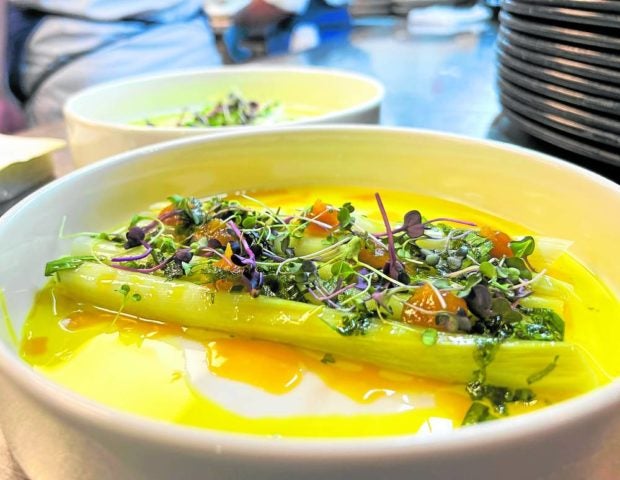 ECO-CONSCIOUS KITCHEN | In a restaurant on the first floor of the Parisian monument, French chef Thierry Marx not only prepares meals with organic ingredients, but also minimizes the carbon footprint of his kitchen. (Reuters)

PARIS — A chic restaurant on the first floor of the Eiffel Tower may not be the obvious setting for environmental activism, but star chef Thierry Marx wants to make it a showcase for climate-friendly cooking.

Offering seasonal and local ingredients, cooked with minimal energy consumption, its restaurant “Madame Brasserie” offers diners a spectacular view of Paris and a glimpse of how the restaurant industry can dress a greener table. .

Putting the finishing touches on a leek entrée as his team prepares for evening service, Marx said his menu is designed to minimize the restaurant’s carbon footprint.

“These leeks, in season now, were grown less than 50 kilometers from here. We cook them in their own juice and we dress them with herb shoots grown in an organic vegetable garden on the Paris ring road and delivered by bike,” he explains.

“It’s simple, has a limited carbon impact, it’s easy to eat and economical – we do our job with minimal environmental impact,” he added.

Marx – who won his first Michelin star in 1998, runs several restaurants and is a national celebrity due to his appearance on TV cooking shows – said that since opening in June the entire restaurant has been designed to save money. water and energy.

Twenty years ago, a restaurant like this would have been scorching hot before evening service, with all the hobs and ovens on, he said.

Now his team cooks on induction cookers with copper pans, which only heat the pan itself without heating up the whole kitchen.

“We are in the middle of an energy crisis and an environmental crisis, we can’t assume it doesn’t concern us because we run a restaurant. The realization of all this has sometimes been a bit late in this business , but today there are very few restaurateurs or hoteliers who do not want to make this transition,” he says.

The disease of food waste: millions are starving as bins fill with leftovers