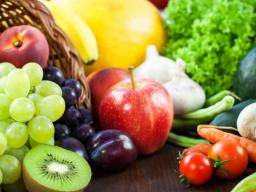 A new analysis seems to reignite the debate on the nutritional value of organic foods compared to conventional foods, finding that organic crops and crop-based foods contain up to 69% more of certain antioxidants, are four times less likely to contain pesticide residues and have significantly lower levels of cadmium, a toxic heavy metal.

Led by the University of Newcastle in the UK, the international team of experts reports their findings in the British Journal of Nutrition. In what is considered the largest study of its kind, the researchers describe how they pooled and analyzed data from 343 studies comparing the differences in the composition of organic and conventional fruits, vegetables and grains.

Study director Carlo Leifert, professor of ecological agriculture at Newcastle University, says the evidence is “overwhelming” and shows that:

“[â€¦] choosing foods produced according to organic standards can lead to increased intake of nutritionally desirable antioxidants and reduced exposure to toxic heavy metals. This is an important addition to the information currently available to consumers which has so far been confusing and in many cases contradictory. “

Professor Leifert and colleagues say their findings suggest that by switching to organically grown foods and foods made from them, people would consume additional antioxidants equivalent to eating between one and two more servings of fruit and vegetables per day.

They would also consume less cadmium, one of the three metal contaminants – the other two being lead and mercury – for which the European Commission has given maximum levels allowed in food.

In their analysis, the team found that cadmium levels were almost 50% lower in organic crops than in conventional crops.

For a crop to be considered “organic”, the grower is not allowed to protect it with synthetic chemicals or to feed it with certain mineral fertilizers (for example, nitrogen compounds, potassium chloride and superphosphate. ). This is to reduce the environmental impact of nitrates and phosphorus, and to avoid pesticide contamination of groundwater.

Instead, organic growers are supposed to feed regular organic fertilizers, such as manure and composts, to enrich nitrogen in the soil by rotating legume crops, and use methods of protection of non-chemical crops, such as crop rotation, mechanical weeding and biological pest control.

The results contradict those of two large studies – one published in 2009 and the other in 2012 – which found no substantial difference or nutritional benefit in organic foods compared to conventional foods.

The 2009 study – which was commissioned by the UK Food Standards Agency (FSA) – was the first systematic review of the literature on organic foods compared to non-organic foods. Researchers at the London School of Hygiene and Tropical Medicine concluded that there was currently no evidence to support the selection of organic over conventional foods on the basis of their nutritional superiority.

The 2012 study was also a review of the literature on organic foods versus conventionally produced foods. There, researchers at Stanford University School of Medicine also concluded that aside from “weak evidence” of higher phenol levels in biologics, there was no significant evidence indicating nutritional benefits of consuming organic foods.

Professor Leifert says research on organic versus conventionally produced foods has been slow to take off and more studies have been published from these reviews:

“We have benefited from a much larger and better body of studies than our colleagues who have done previous reviews.

For example, more than half of the studies in the Newcastle-led review were not available to the team that conducted the 2009 FSA-sponsored study. Professor Leifert and colleagues also argue that the Stanford study incorporated less than half the number of comparisons for most health-promoting nutrients.

In addition, due to the much larger amount of data available, they were able to “use more appropriate statistical methods to draw more definitive conclusions about the differences between organic and conventional crops,” says Dr. Gavin Stewart, expert in meta-analysis, Professor at Evidence Synthesis at Newcastle.

According to Professor Leifert, while the results undoubtedly show that there are compositional differences between organic and non-organic cultures, there is now an urgent need for well-controlled human studies that identify and quantify the impact on health of the switch to organic foods.

Meanwhile, there has been a critical backlash from some experts about the new findings. One of them is Dr Alan Dangour, Food and Nutrition for Global Health reader at the London School of Hygiene & Tropical Medicine, and first author of the 2009 FSA article.

Dr Dangour says the new review mixes good-quality data with poor-quality data in a way that is “very problematic” and, in his opinion, significantly weakens the researchers’ conclusions.

“All natural products vary in their composition for a wide variety of reasons,” says Dr Dangour, adding that the article “does not provide any convincing evidence to refute our earlier findings”, which he said were fully supported by the ‘Stanford study from 2012, that there is “no significant difference in nutrient content between organically produced and conventionally produced foods.”

The study was jointly funded by the European Framework 6 program and the Sheepdrove Trust.