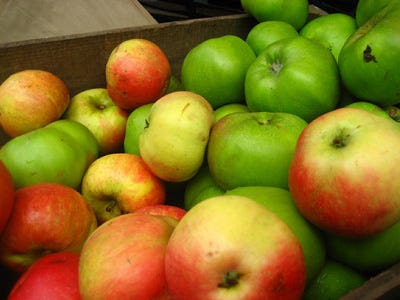 Organic foods aren’t any better for you than traditionally grown foods, but they may taste better, researchers say.

Despite the perception that organic foods, which have been grown without the use of artificial fertilizers, pesticides and other chemicals, are purer, more nutritious and virtuous, scientists say there are few evidence that they are healthier.

A review of 237 organic food research studies found the products were 30% less likely to contain pesticide residues than conventionally grown fruits and vegetables, but were not necessarily 100% chemical free .

They found no consistent difference in the vitamin content of organic products.

There were higher levels of phosphorus in organically grown foods, but the researchers said that mattered little because so few people lacked it.

The only other significant finding was that some studies suggested organic milk contained higher levels of omega-3 fatty acids, which is thought to be important for brain development in infants and for cardiovascular health.

Dr Crystal Smith-Spangler, a professor at Stanford’s Center for Health Policy, said: “Some think that organic food is always healthier and more nutritious.

“We were a little surprised not to find that.”

“Our goal was to shed light on the evidence.

“This is information that people can use to make their own decisions based on their level of pesticide concern, budget and other considerations.”

She said the general message was that people need to eat more fruits and vegetables, regardless of culture, because most Western diets are deficient.

The research was published in the journal, Annals of Internal Medicine.

Dr Dena Bravata, Senior Fellow at Stanford’s Center for Health Policy, said: “There’s not much difference between organic and conventional food, if you’re an adult and you’re making a decision based on your health.

“If you look beyond the health effects, there are many other reasons to buy organic products rather than conventional ones.”

She said taste, concerns about the effects of conventional farming practices on the environment and animal welfare are some of the reasons people choose organic produce.

The group found that two studies comparing children consuming organic and conventional diets found lower levels of pesticide residues in the urine of children on an organic diet, although urinary pesticide levels in both groups of children are below the authorized safety thresholds.

Additionally, organic chicken and pork appeared to reduce exposure to antibiotic-resistant bacteria, but the researchers said the health implications of this were unclear.

The group said the research was difficult because of the different ways organic foods have been tested, other factors that affect nutrient levels such as soil and weather conditions and the effect that farming methods organic can have, such as using manure as fertilizer which can carry bacteria.

Professor Alan Dangour, Senior Lecturer in the Nutrition and Public Health Interventions Research Unit at the London School of Hygiene and Tropical Medicine, said: “Smith-Spangler’s paper is a careful and detailed review reports. This again demonstrates that there are no significant differences in nutrient content between organic and conventional foods.

“Smith-Spangler’s article also examines the health benefits of organic foods and, like our 2010 review, finds no evidence that organic foods are healthier than conventionally produced foods.

“However, throughout the article, the authors make it clear that the evidence base is weak and highly variable.

“Consumers choose organic foods for a variety of reasons, but this latest study identifies that currently there are no compelling differences between organic and conventional foods in terms of nutrient content or health benefits. health.”

A spokesperson for the Soil Association said: “This US study, with limited application in Europe, found that organic foods help people avoid pesticides in their diets, recognized that organic milk contains significantly higher levels higher levels of beneficial nutrients and claims that the organic food market is skyrocketing in America. Significantly, given the growing concern about

“However, the review only looked at some existing studies and omitted many, including any that were not written in English.

“A UK review article, using the correct statistical analysis, found that many of the differences in nutrient levels between organic and non-organic fruit and vegetables observed in this US study are in fact very significant.

“As the study says, there are almost no long-term studies on the health impact of eating organic food on people, but the study mentions a long-term research project funded by the Dutch government, which found that children who consumed dairy products over 90 percent of which were organically produced had a 36 percent lower risk of eczema by age 2.”