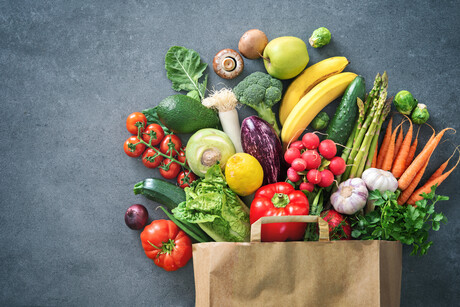 How do organic and non-organic foods influence our gut microbiome?

The effect of organic and conventionally grown foods on the gut microbiome remains unclear, indicating that more research is needed to determine which foods are beneficial.

In recent years, the trillions of microorganisms that live in our digestive tract have taken their place in the limelight.

Known as the gut microbiome, each of us has a different combination of about a thousand different bacterial species, which makes each microbiome as unique as our fingerprints.

The gastrointestinal tract is home to billions of microorganisms that we call our microbiota.

Researchers are starting to understand how these microorganisms significantly affect our health and well-being, including the impacts on mental health through the ‘gut-brain axis‘.

A clear conclusion is that the the food we eat influences the composition and function of the human gut microbiome – both positively and negatively.

Getting the most from probiotics

Probiotics, the microorganisms that provide us with health benefits when eaten alive colonize the gut, supporting proper digestion and other essential functions of the gut microbiome.

Usually, probiotics are consumed with their carrier food items such as yogurt or fermented foods such as sauerkraut. Those food products can interact with probiotics modify their functions and efficiency.

Since these carrier food ingredients can be produced by organic and non-organic (also known as conventional) farming systems, we wanted to understand if actual farming practice could influence the functionality of probiotics and the gut microbiome.

This information had not been thoroughly examined before, which is why the University of Melbourne’s School of Agriculture and Food approached Australian Organic Limited (AOL), the leading body for the organic industry in Australia that funded our research team, to assess the existing scientific literature.

The results have not yet been peer reviewed, but can be viewed in the AOL Industry Research Series.

Organic farming is one of the fastest growing segments of global agriculture and a 2020 survey, also commissioned by AOL and completed by the school, shows that an additional 500,000 Australian households have purchased organic products in the past 12 months, mainly for environmental and health reasons.

However, the published literature lack of solid evidence that organic foods are significantly more nutritious than non-organic foods overall, so this area requires further research.

Focusing on studies published between 2010 and 2020, six different food categories were selected for our review, including dairy products, grains and grains, fruits and vegetables, meat, wine, and fermented foods. .

Although the exact nature of the nutritional effect was found to vary between and within these food categories, organic farming practices appear to have an effect on some of the nutritional content of foods (as discussed in more detail below. below).

For example, although the amounts were not significant, organic fruits and vegetables tended to contain similar or higher levels of phenolics than non-organic produce.

Phenolic compounds are interesting as potential protective factors against cancer and heart disease. Their beneficial effects on obesity, diabetes and neurodegenerative diseases, potentially due to their antioxidant and anti-inflammatory effects, are also reported in the literature.

These seem to be due to their bioactive metabolites, the resulting products after digestion, as well as their role as beneficial prebiotics; provide nourishment for probiotics and gut microbiota, and express antimicrobial properties against pathogenic gut microbiota.

Nutritional differences can also be seen in meat and milk when comparing organic and non-organic farming.

For example, there are beneficial differences in the fatty acid profile in organic milk compared to non-organic milk. Fat soluble vitamins including vitamin A and E are higher while the overall fat content seemed to be lower also in organic milk.

But only a few studies focus on these nutritional differences and their impact on the gut microbiota. Take the example of iron – higher levels of iron (Fe) can promote growth of pathogenic microorganisms in the gut while an iron deficiency can lead to a reduction in the amounts of beneficial compounds produced by the gut microbiota.

Our review found variability in the mineral nutritional composition of meat, wine and milk when comparing different production systems.

At this point, we are uncertain whether these differences in mineral and nutritional composition in organic or non-organic foods affect the functionality of the gut microbiota and we need more research in this area.

In grains and cereals, organic farming practices seem to modify the carbohydrate composition, with more fiber and total carbohydrates found, but no significant difference in nutritional content.

Previous studies have been shown that fiber promotes the growth of probiotics Lactobacilli and Bifidobacterium species, and it has been shown that it advantageously modifies the composition of the metabolites produced by the intestinal microbiota.

The total carbohydrate intake and the proportions of the different types of carbohydrates consumed are associated with alterations in the gut microbiota. But the influence of organic or non-organic grains and cereals is still unknown.

In addition, in cereals as in fresh produce, the nutritional profile of a product often depends as much or more on cultivar or crop variety as on agronomic practices, and these factors should be taken into account in future studies.

Ultimately, Kimchi, which is made from organic radish, had more beneficial microorganisms than kimchi made from non-organic radish, and therefore may have a potentially positive impact on the gut microbiome.

Previous search has also shown that consuming organic foods can also reduce exposure to Residues of pesticides and some antibiotic resistant bacteria, having a positive influence on the gut microbiome and probiotics.

Overall, our review of the current literature found that some organic foods may be higher in certain factors that benefit the gut microbiome, but the degree of these positive effects is uncertain given the limited number of studies. carried out to date.

We clearly need more studies to verify these phenomena.

In the meantime, one of the best things we can all do to support the billions of microorganisms in our gut is to eat a variety of low-processed, high-fiber foods, especially fresh fruits and vegetables.

This article first appeared on Pursuit. Read it original article.

How do organic and non-organic foods influence our gut microbiome?