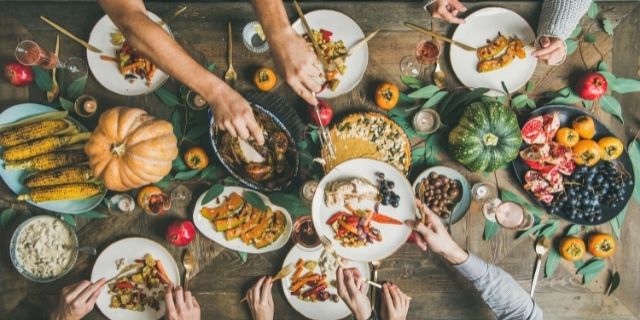 Go organic this Thanksgiving and keep the poisonous turkey and fixings off your plate.

(Beyond pesticides, November 19, 2021) Thanksgiving is an opportunity for people to come together and give thanks for the bounty of an organic harvest. Unfortunately, many Thanksgiving meals are produced by chemical farming practices that use dangerous pesticides, genetically modified (GE) crops, and synthetic petroleum-based fertilizers. These inputs, in addition to being unnecessary, degrade ecosystems and affect the health of consumers and agricultural workers. It’s never too late to start a new tradition – for this year and into the future, make your Thanksgiving feast a lasting feast by going organic.

Today more than ever, it is important to go organic:

For our own health

Going organic dramatically reduces the amount of pesticides in a person’s body. While Thanksgiving isn’t usually the time to think about a diet, we’ll try to make it informative: Recent research has revealed that one of the biggest health benefits of the Mediterranean diet comes when you go organic. Compared to individuals following a Mediterranean diet filled with foods from chemical agriculture, those who ate organic had 91% less pesticide residues. This finding is supported by a considerable body of previous research.

The levels of pesticides in our bodies have important implications for the health of children. A 2013 study found that children with higher levels of pyrethroid insecticides in their urine were more likely to score high on reports of behavior problems like inattention and hyperactivity. Many pesticides are also considered to be obesogenic, which can alter an individual’s response to diet and fasting, and promote weight gain from one generation to the next.

The decline in pollinator populations shows no signs of stopping, and in many ways the crisis is entering a new phase. After more than a decade of constant loss of managed pollinators (2021 being the second worst year ever), due to acute and chronic exposure to neonicotinoid insecticides, many beekeepers are being forced to quit their profession. And with wild pollinators, researchers are now seeing the devastation brought on by pesticides that are toxic to pollinators on the market despite overwhelming evidence of their dangers. The Rusty-patched Bumble Bee has been officially listed as Endangered, just like monarch butterflies, and the American bumblebee is currently under study.

Every third bite of food depends on the tireless pollination efforts of these small and powerful insects. Combine that with estimates from the United States Department of Agriculture (USDA) that pollination contributes between $ 20 billion and $ 30 billion in economic value to agriculture each year and you not only have a necessary link in the food production chain. , but also an incredibly valuable link in economic terms.

Imagine if you cook your Thanksgiving dinner without the help of this little but invaluable worker. That tangy and sweet cranberry sauce? Faded away. Those crispy chunks of onion on the green bean casserole? Story. Those honey-sweet carrots? Faded away. And finally, the pumpkin pie and the cup of coffee you kind of make room for in your stomach? A fruit of your imagination. As odd as a Thanksgiving without a pumpkin pie or any of those staples might sound, it’s an all too real scenario we could face if pollinators aren’t protected. To stop this crisis, we must stop the use of toxic pesticides that harm these important species. Supporting organic farming, which never allows the use of neonicotinoids or other toxic synthetic insecticides, helps develop the market for pollinator protection practices.

In solidarity with farmers

Farm workers are the backbone of the American farm economy. As we sit down with our friends and family for Thanksgiving, appreciate how our delicious meal arrived at our tables. The turkey, the potatoes, the stuffing and the cider are all from fields far from our homes, and those who work in those fields deserve our appreciation and commitment to their struggle. Many of these workers work long hours, in appalling conditions, and are exposed to pesticides that put their health and that of their families at risk. So, as we enjoy our pumpkin pie, cranberry sauce, and apple crumble, remember all the farm workers who worked hard to bring our meal to the Thanksgiving table. But don’t just give thanks, work to improve their conditions.

Our food choices have a direct effect on those around the world who grow and harvest what we eat. This is why foods labeled organic are the right choice. In addition to the serious health issues associated with the actual residues of toxic pesticides on the food we consume, our food purchasing decisions support or reject unsafe farming practices and the protection of farm workers and farm families. Check out the Beyond Pesticides Guide to Conscious Eating to see how your food choices can protect farm workers. To complement the contribution you make by purchasing organic food, consider contacting the following organizations to find out what more you can do; Campesinos sin Fronteras; Centro Campesino; Coalition of Immokalee Workers; National Fair Trade Association; Florida Farmers Association; Agricultural Workers Health and Safety Institute; Farmer Justice; Agricultural Work Organization Committee, AFL-CIO; Farmer Support Committee (CATA); Lideres Campesinas; United tree planters and farm workers in the Northwest; Farm workers united.

How to fight against the shortcomings of chemical agriculture? Go organic.

Our food choices have a direct effect on the health of our environment and those who grow and harvest what we eat. That’s why foods labeled organic are the right choice. USDA Organic Certification is the only food labeling system subject to independent public review and oversight, ensuring that toxic synthetic pesticides used in chemical-intensive agriculture are replaced with focused management practices. on soil biology, biodiversity and plant health. This eliminates toxic chemicals commonly used in food production and processing that are not labeled as organic pesticides that contaminate our water and air, damage biodiversity, harm farm workers, and kill bees, birds, fish and other wildlife.

Fortunately, the majority of common Thanksgiving products can easily be replaced with organic equivalents. Canned yams, for example, often contain genetically modified ingredients, but can be substituted with fresh organic yams. Another staple, like Pepperidge Farm crackers, can be replaced with organic crackers like Mary’s Gone crackers or Nature’s Pathway crackers. Consider replacing GE Cranberry Sauce with homemade organic cranberry jellies and fair trade sugar. Organic jellied cranberries, such as Tree of Life or Grown Right, are quick alternatives. Finally, pre-made stuffing, like Kraft’s Stove Top stuffing, can be replaced with homemade stuffing or Arrowhead’s organic stuffing mix. Simply Organic offers a range of organic recipes posted on their website if you need more ideas.

The turkey is the symbol of a traditional Thanksgiving meal. However, turkeys are often fed cereals treated with pesticides, medicated with antibiotics, and loaded with steroids and hormones. Additionally, turkeys are often fed on inorganic arsenic, a known carcinogen, which is used to promote growth and pigmentation. In order to avoid all of this, your best bet is to invest in an organic outdoor turkey.

While the organic label dramatically increases the protection of consumers and agricultural workers from exposure to toxic pesticides, it also creates significant environmental restoration benefits. The search for the Rodale Institute Farming Systems Trial Â® (FST) has revealed that organic and regenerative agriculture actually has the potential to reduce the impacts of climate change. This occurs through the drastic reduction in the use of fossil fuels to produce crops (about 75% less than conventional agriculture) and the significant increase in carbon sequestration in the soil.

Eating organic is a first step as an engaged consumer, but we still need to protect the true core values â€‹â€‹and principles of the organic label, as they are meant to be.

This Thanksgiving, you can avoid exposure to harmful chemicals like glyphosate, stay away from genetically modified foods, and protect your family, pollinators, and farm workers from federal agency shortcomings by striving for a 100% organic and healthy meal. .

And don’t stop there!

Going organic every day of the year is important to protect your family and friends from toxic chemicals. You can continue to fight for the welfare of organic by helping to defend organic standards against USDA changes that will weaken public confidence in the organic food label. Organic practices follow strict standards that do not compromise the health of people and the planet. Let’s cultivate the organic food label as a symbol that honors this tradition. To learn more, visit the Beyond Pesticides Save Our Organic webpage.

Best wishes for a healthy and happy Thanksgiving!

All positions and opinions not attributed in this article are those of Beyond Pesticides.

SIGN UP to receive our weekly update and action of the week delivered to your inbox.

Take-out and dining options in the East for Thanksgiving