WASHINGTON, DC – Just under half of Americans, 45%, actively try to include organic foods in their diets, while 15% actively avoid them. More than a third, 38%, say they â€œdon’t think about organic food in one way or anotherâ€.

Organic farming is controlled and certified by the United States Department of Agriculture and must meet strict regulations to be certified â€œorganicâ€. Organic food is free from artificial additions like antibiotics, and organic farming is said to be better for the environment than traditional farming. Organic foods often cost more than non-organic foods, which could prevent some Americans from including them in their diets.

This is the first year that Gallup has asked questions about organic food consumption as part of the annual Eating Habits Survey. Forty-five percent actively try to include organic foods, placing these foods in the middle of the list of 12 others measured – far behind fruits and vegetables, but well ahead of fats, sodas and sugar. The 38% who say they â€œsomehow don’t think of organic foodâ€ is higher than the percentage for any other food product.

In the West, more than half include organic foods in their diets

In the United States, organic food inclusion is highest in the West (54%) and lowest in the East (39%). Americans who report living in a large or small city are more likely to eat organic foods than those who describe their location as a city or rural area, respectively 50% vs. 37%, while those who live in suburban areas fall between these two groups. . 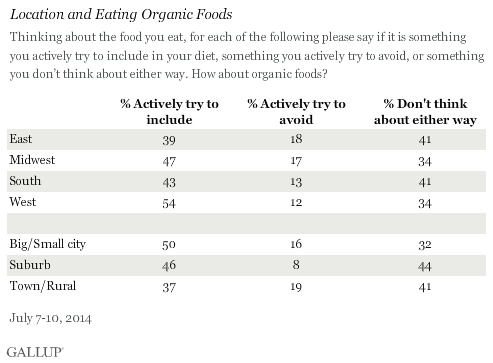 More than half of Americans aged 18 to 29 actively try to include organic foods in their diets, compared to a third of Americans 65 and older. Older Americans are slightly more likely than other age groups to “think about organic food anyway”. 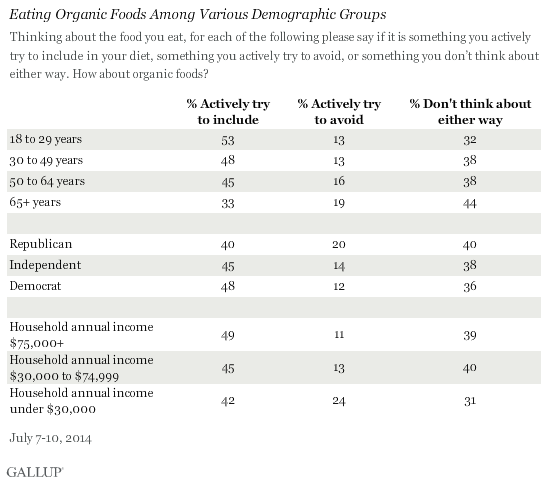 Organic food is subject to strict government regulations in order to earn this title. They cannot be treated with chemical pesticides and organic food producers must use natural fertilizers. This often results in more expensive food, a major downside to organic food. However, proponents praise organic food as being better for the environment and free from potentially harmful aspects like pesticides and additives. Studies are still inconclusive as to whether organic foods are actually healthier.

Since nearly half of Americans actively try to include organic foods in their diets, they may view the advantages of organic foods as outweighing their disadvantages, such as the higher cost or limited access. Income and location appear to be factors in organic food preference, although this can change. Wal-Mart, the largest retailer and grocer in the United States, and known for its low-cost business strategy, has announced plans to start selling organic food. Organic foods may soon become more easily accessible and affordable, which in turn may prompt more Americans to include them in their diets.

The results of this Gallup poll are based on telephone interviews conducted July 7-10, 2014, with a random sample of 1,013 adults, aged 18 and over, living in all 50 US states and the District of Columbia.

For results based on the total national adult sample, the margin of sampling error is Â± 4 percentage points at the 95% confidence level.

In addition to the sampling error, the wording of the questions and the practical difficulties of carrying out surveys can introduce errors or biases in the results of opinion polls.