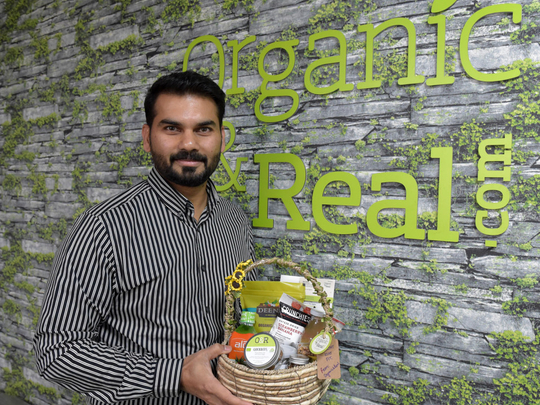 Dubai: The demand for organic food is increasing as people become aware of healthy lifestyles by spending on healthy food rather than medical bills.

Manu Mahdi, CEO and Founder of Organic & Real.com, said he has been in Dubai for 16 years, with most of his career spent in the consumer electronics industry.

However, he said there was a lot of food movement going on, with more and more people switching to a vegan diet.

â€œSo there is an awareness of consuming good food, but when I looked at the UAE, the availability of good food is a challenge. Even though I want to have food without pesticides, where can I get it? Organic prices are very high, â€he said.

Additionally, he said 90 percent of people avoid organic food because of the price and the rest don’t believe it.

â€œThey say it’s just a marketing trend and since my dad didn’t have organic food, why should I have any? We’re looking at that 90%. It made me venture into the organic industry and make a change in the system by providing a lot of organic products to the masses and not the elite, â€he said.

Organic & Real is an exclusive e-commerce portal for organic products and Mahdi claims it is one of a kind in the region.

According to Organic & Real, the CCG market for organic food is still small, but the annual growth rate is 20%. The market size of UAE is around 12.4 billion Dh in 2018 and Saudi Arabia is around 25 billion Dh.

“The only way we can make a change is to influence the supply chain and make it accessible to more people, to try to get it directly from the sources, to cut down on the middlemen and to transfer the benefits.” to buyers.

â€œMost of the time, we buy the vegetables from local farmers but in summer it is very difficult to source locally, so the products come from Europe. During the season, the prices of organic vegetables compared to non-organic vegetables are almost the same, â€he said.

The biggest challenge, he said, is during the summer season, as prices can more than double.

â€œThis is when the supply chain needs to be put in place and that’s what I’m looking at. When it’s not the season here, it’s the season in some parts of the world. So it is possible to get it from India at an affordable price and provide it to customers, especially Asian expats, â€he said.

For Europeans, the price is not a concern because they tend to eat organic.

As for Asians, they are very price sensitive, he said.

Mahdi started his business in April and began sales in August.

Organic & Real works directly with farmers and distributors and has over 8,000 products from 50 suppliers. It has approximately 1,000 registered users.

â€œWe won’t have physical stores like the others. Any supplier certified by the EU, the National Organic Production Program (NPOP) or the United States Department of Agriculture (USDA) can work with us, â€said Mahdi.

Its goal is to reach 20 countries in seven years. Next year, the market aims to launch it in Kerala, India, Saudi Arabia and Bahrain.

Mahdi has secured start-up funding from family and friends of approximately Dh 2.75 million to start his business and of this amount Dh 1.5 million is his personal investment.

â€œFor our expansion, we are looking for a partner and are in discussion with many players to raise $ 1 million and support us in order to make our dream a global project. Even though the UAE is a great place to start a business, the scale is much lower. For such an endeavor to have an impact, it must be far reaching. For that, we have to go to Asia, which is my main market, â€he said.

â€œSo the UAE and Saudi Arabia will give me room to continue and if I can enter India in parallel I can do magic,â€ he said.

Chef Megan Mitchell will create an organic menu to benefit