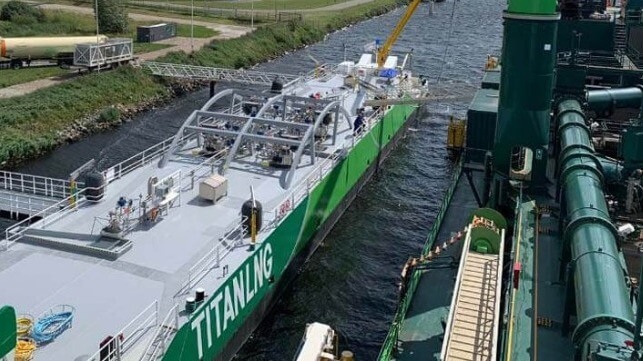 
BioLNG production is already increasing, it is part of the circular economy and there are enough raw materials available at the moment. Local production and various raw materials can also improve energy security, for example in the European Union (EU). During this time, suppliers, shipowners, ship operators and all other actors in the value chain can continue to use existing LNG assets and infrastructure. Caspar Gooren, Carbon Zero Director at Titan LNG, explains why bioLNG is clearly the next step on the road to maritime decarbonisation.

BioLNG is biogas that has been liquefied and can therefore be used as a sustainable marine fuel. Biogas is produced when organic waste and residue ferments and anaerobic digestion occurs. This can be achieved on a commercial scale by putting biomass in a digester to produce biomethane plus bioCO2. This biomethane is then liquefied into usable bioLNG. The raw material for this bioLNG is mainly made up of domestic and agricultural waste, for example household waste, sewage sludge and manure.

By using waste feedstock, bioLNG production can capture methane that would otherwise be released into the atmosphere. Therefore, the result is a potentially negative greenhouse gas (GHG) emissions fuel, not just zero. By aiding in the recycling of waste, the production of bioLNG also contributes to waste management and supports the circular economic model that most environmentalists and economists believe is essential to combat environmental degradation.

There is more than enough of this feedstock available to scale up bioLNG production and meet the needs of the shipping industry. Especially since part of the biogas is currently burned in cogeneration and injected into the electricity grid, which is not the optimal way to use this energy because electricity can be produced efficiently from other sources. renewable.

Take the EU as an example; its total biogas availability is close to 170 terawatt hours. If all of this were converted into bioLNG, it would be 11 million tonnes. Today, more than enough biogas could be supplied to the shipping industry in the form of bioLNG using only EU raw materials.

Titan LNG has already started working on several bioLNG production and extraction projects. For example, the FirstBio2Shipping project – a collaboration between Titan, Attero and Nordsol – received $4.5 million in EU funding. The plant, located at the Attero site in Wilp, the Netherlands, will produce around 2,400 tonnes per year of bioLNG, with the first fuel to be produced as early as 2023.

The potential for local production of bioLNG, as demonstrated by the FirstBio2Shipping project, can also improve energy security. When producing bioLNG, governments do not rely on the scarce resources of neighboring countries, but can instead generate their own energy using available and abundant waste feedstocks. This production can even be decentralized, which decouples energy production from national security.

The raw materials from bioLNG are also diverse. Livestock waste, landfill gas (LFG), activated sludge from sewage treatment plants, and industrial, institutional, and commercial (IIC) waste are all options. This diversity further enhances energy security by reducing dependence on a particular resource and minimizing exposure to fluctuating prices of that specific resource.

Safety is a major advantage of using LNG and its derivatives, which is often taken for granted by maritime transport players. According to DNV, LNG removes up to 80% of nitrogen oxides (NOx) from the air and virtually eliminates sulfur oxides (SOx) and particulate matter (PM) emissions. This immediately has a positive impact on local air quality and working conditions for seafarers. Seafarers also have extensive experience of working safely with LNG. Many of these practices also apply to the handling of bioLNG and hydrogen-derived LNG, while alternatives to LNG still present major safety issues that need to be addressed, including toxicity and flammability.

The marine industry is well aware of the other practical benefits of using bioLNG as a marine fuel. In particular, the ability to deposit bioLNG into existing LNG-fueled vessels and bunkering infrastructure, and to blend bioLNG with traditional LNG or hydrogen-derived LNG in any ratio.

However, these abilities indicate a larger advantage that is often overlooked. LNG offers options to shipowners and operators. They can choose LNG to tackle emissions now, then switch to bioLNG to further reduce emissions as production continues to grow and become more efficient, all without having to adapt infrastructure. They can then switch to hydrogen-derived LNG, produced from renewable energy, once it becomes available – still using the same infrastructure.

Engine manufacturers are creating dual-fuel LNG engines that can use many debated alternative marine fuels, including bioLNG and hydrogen-derived LNG. This is further proof that investments in LNG infrastructure and LNG-powered ships are future-proof whether technologies change or not. Whatever happens in the future, with LNG, shipowners and operators have a clear long-term path to fully decarbonizing their ships, while reducing emissions now, complying with regulations and offering a advantage in carbon markets.

For example, as a key part of the EU’s ‘Fit for 55’ package paving the way for climate neutrality in Europe by 2050, the Emissions Trading Scheme (ETS) will play a key in the choice of fuels. LNG will give ship operators a competitive advantage over those using petroleum-based marine fuels under the EU ETS, while bioLNG goes a step further and can provide a competitive advantage to long term compared to even traditional LNG. The benefits of using bioLNG within the ETS should not be overlooked.

Caspar Gooren is a Zero Carbon Director at Titan LNG, a leading independent physical supplier of commercially available alternative fuels, such as LNG and bioLNG, to industrial customers, truck service stations and the maritime sector.


The views expressed here are those of the author and not necessarily those of The Maritime Executive.